Welcome back to the development blog for my work-in-progress MMORPG, purplefox. It’s been about two weeks since my first devblog, and I’ve made some great progress since then! I’ve been focusing work on the client, and I now have a solid foundation for it. In this post I’m going to talk about: what technologies I’ve decided to use, resources that I found helpful, what I’ve built so far, and what’s next for purplefox.

I’ve created a GitHub repository for the purplefox client so if you’d like to see any of the code I discuss in this post, feel free to check it out.

In my first post, I outlined the following roadmap for the client:

I’m happy to report that I’ve accomplished all of this and then some! Currently the client is ~500 lines of C code. Here’s what the current client repo looks like from a file standpoint:

Here’s a bunch of tech I’m using to build this project. It’s amazing having so many free & open-source tools, libraries, and resources at my disposal- cheers to the open-source community.

Client Networking I - Sending a JSON Payload to the Server

When building a game it’s tempting to just want to dive in and start doing game mechanics, player movement, animations, etc. However, this will not be an ordinary game- this is an MMORPG ladies and gents. Therefore, we have to keep our feet on the ground. For the client skeleton some of the most important code to write first is network communication. As I talked about in the first post, the game is going to talk TCP and send & receive JSON payloads. Again, this game is not being designed to be high-speed enough as to require UDP and we will be using JSON because it’s 2018, bro.

Here’s a JSON payload that I came up with, this likely will change over time but suits my needs for now. Everything sent to the server will have the common fields username, command, and arguments. This allows the server to know who we are talking about, what we want to do, and be given the data needed to go along with it.

So the first thing we need to do is build our JSON payload in C using cJSON. Since our payloads will always contain a few common fields, we’ll create a payload_init to start creating the JSON payload. This is mostly a lot of using the cJSON API, see the README if you want to learn more.

Next, we need a way to send messages to our server. Using SDL_net we can connect to a server and send a message quite easily.

All of this and we still don’t have a server, we’ll let’s fix that. As talked about in my first post, the server will be written in Python & Twisted. For now, we can just make a simple server that will verify we are being sent some data. The next devblog will be focusing on the server architecture, so more to come…

Now to put this all together we will connect to the server, build a payload, and send it:

Sending messages to the server ends up being much easier than receiving messages from the server. This is because the client can decide when it wants to send a message, but it cannot decide when it will receive one. Therefore, it must always be ready (independent of its primary execution) to receive a message. This is accomplished by threading, more specifically to run a separate thread for the client to continually receive data and act appropriately on incoming messages.

I want to give a HUGE shout out to the MMORPG Eternal Lands, it’s open-source and can be found here. The main.c and multiplayer.c files have been super helpful when coding this. Eternal Lands is a free to play MMORPG written in C using SDL by Radu Privantu and is still online & active to this day, and it’s been online for over 15 years!!! Reading through the code for this game has been very helpful. Eternal Lands also uses threading, you can see it’s client recv loop here.

First, let’s create some code to receive messages. Then we’ll create our client_loop which will run inside of our new thread. The client_loop first checks if the server has become disconnected, and then it checks the socket for data for 100ms (so ten times a second). If there is data on the socket it will receive the data and then handle the incoming server message. The SDL_net socket code is pretty interesting, check the SDL_net documentation or see my networking.c for more.

Next, we need to actually create the thread. SDL, once again being badass, has threading capabilities! We’ll use SDL_CreateThread and then use SDL_WaitThread to wait for the thread to finish up (on server disconnect).

Fantastic, now we have a separate thread for receiving messages from the server.

In our client loop, I breezed over handle_incoming which (duh) handles the incoming messages. Because our client is sending & receiving JSON, we’ll need to parse the incoming JSON data and do things with it.

Now that we can send & receive messages to and from the server, it’s time to do something actually useful with it. The first natural thing to want to do is player movement. So to start this process, we’ll get a player sprite moving around the screen and reporting its location to the server.

I’m going to skip over a bit of SDL initialization, see the purplefox main.c for that. If you’re interested in learning SDL2 basics check out, Writing 2D Games in C using SDL by Thomas Lively and the associated GitHub repo.

Here’s the sprite sheet (from Tiny 16: Basic) that I’m using:

And, here’s what it looks it: 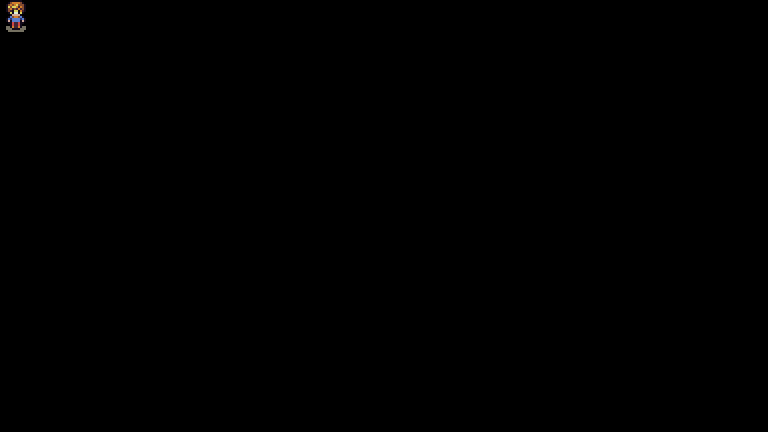 Not that exciting, let’s get the little guy to move around and let the server know where we are. We’ll now need to create a game loop, handle some keyboard input, and send our location to the server. We can modify our player.y value when we want to change the row of our sprite sheet (for changing direction) and our player.x value to cycle through the animation. I created a frame_time variable which loops through my animations when the player is moving. Putting together some of the things we built above it’s now easy to create a JSON payload for our location and send it off to the server every time we move.

Oh boy, what’s not next?

The server architecture will likely be the focus of the next few posts. Although working with C has been very fun, I’m a much better Python programmer so I’m excited to get working on the server-side. The large milestone at the moment will be to get authoritative server player movement with multiple players connected and then work toward interpolated movement. This will take a decent amount of change on the client-end as well, the client will need to receive player locations and render them. I imagine a game.c file is in the future, but I’m very happy with client structure thus far.

Well this ended up being a giant post. Thanks for reading! Until next time, vesche.