This article is also avaliable in Chinese (中文)!

TL;DR: I created a bot for the game stabby.io, GitHub repo here.

A few weeks back, I was having a very boring night and stumbled upon stabby.io and quickly had an IO game addiction relapse (think agar, but I’ve been through treatment). You spawn into a small map of players identical to yourself and can kill anyone around you. The vast majority of players around you are computer players, and you have to determine who the human players are. 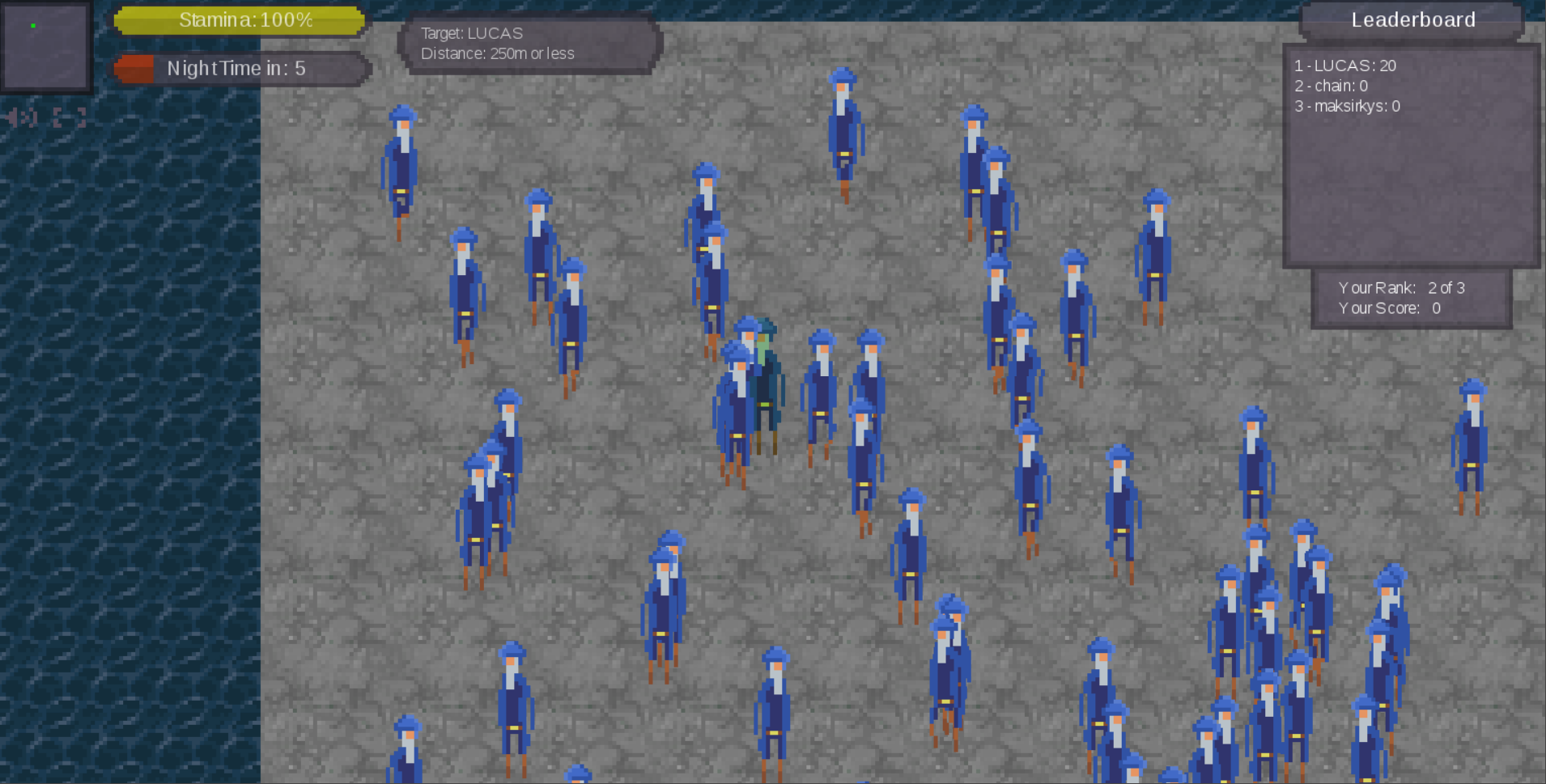 As my night dragged on somewhere in the back of my mind Eric S. Raymond reminded me that boredom and drudgery are evil… I also remembered that the guy who runs LiveOverflow had recently yelled at me (via video) to “Stop wasting your time and learn more hacking!” Thus I decided to turn my boredom and unproductiveness into a fun programming project, and I set out to create a Python bot to play stabby for me!

Before I get into it, the developer of stabby is a very cool guy named soulfoam. He streams programming and gamedev on his Twitch channel, and he gave me permission to create this bot and share it with the world.

My initial thought was to use autopy to capture the screen and send mouse movements based on image analysis (RIP the Runescape bots of my youth). I quickly abandoned this line of thinking as I realized that there was a direct way of interacting with the game- WebSockets! Because stabby is an HTML5 real-time multiplayer game it uses WebSockets for a persistent connection between the client and a server so both parties can send data at any time. 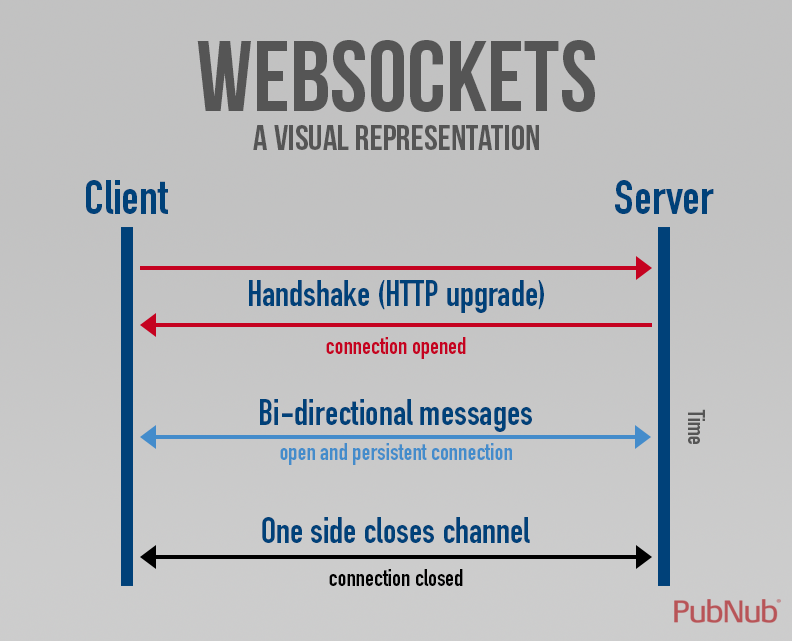 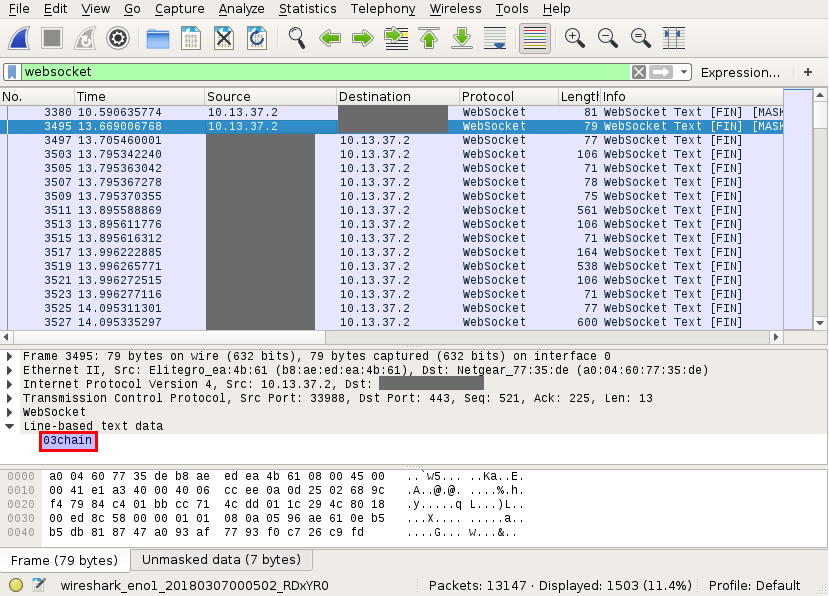 Note: I’m censoring the stabby server IP above so it doesn’t get slammed, I don’t provide the IP with stabbybot so you’ll need to get that on your own. This is to avoid script kiddies abusing the bot. It’s a very simple task to get the server IP if you’re interested.

Where were we? Oh right- Mmm, juicy WebSocket packets. We now see the first sign that we are on the right track! I set my username to chain before starting the game, and within the WebSocket data of the second packet is 03chain being sent to the server. This is how everyone in-game knows my name!

Upon further analysis of the packet capture I determined what the client is sending to the server to initiate the connection. Here’s what we need to recreate in Python:

To connect to the WebSocket server with Python I’m going to use the websocket-client library. Now let’s hack together some code that does what we outlined above…

Big Money, No Whammies… We did it Reddit, server messages!

These are messages being sent from the server to the client. We can now see upon login we get some information about what time of day it is in-game: 030,day. And then some perception data starts rolling in: 05+36551,186.7,131.0,walking,left|+58036,23.1,122.8,walking,right|.... It looks like player id, coordinates, status, and direction facing. We can now start fiddling around and reverse engineering the game communication to begin understanding what the client & server are sending to each other.

For instance, what happens when we kill someone in game? 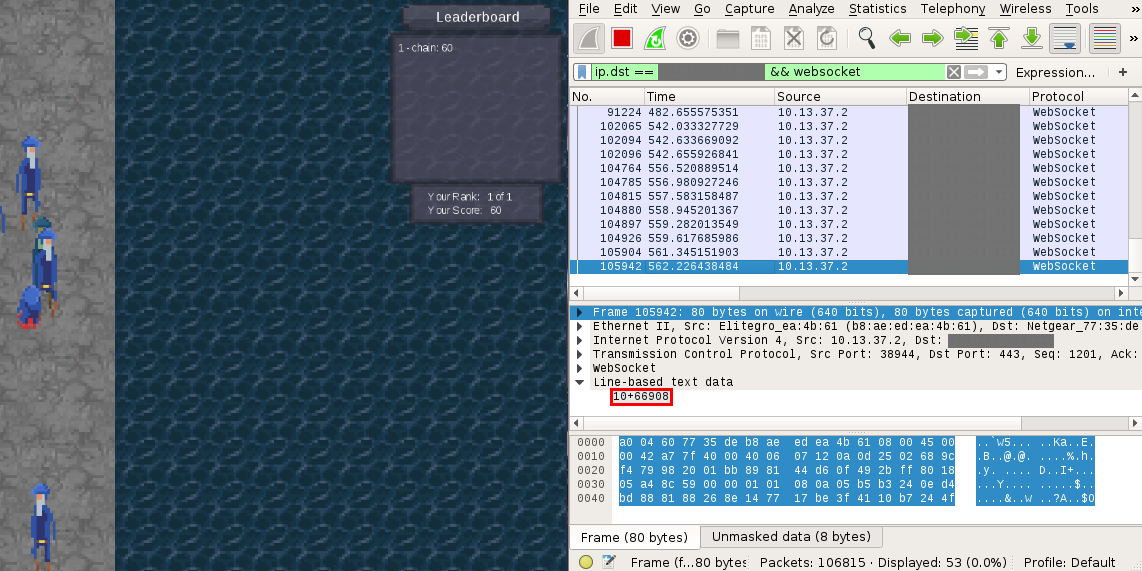 This time with Wireshark I filtered specifically for WebSocket traffic going to (ip.dst) the server. Upon killing someone 10 and then the player id is sent to the server. If you haven’t figured it out yet, everything sent and received by the server begins with a two digit number or event code as I call it. There are nearly twenty of these different event codes, and I still don’t know what all of them do. However, I was able to map out some of the important ones:

With this information we can being to structure our bot!

The main loop in main.py will happen like so:

Let’s take a look at how we can implement a very basic bot with this structure that will move to the location of where the last player was killed. When someone is killed in the game, everyone is broadcast a message like so 14+12906,120.2,64.8,seth. This is event code 14 followed by a comma separated player id, x & y coordinates, and the username of the killer. If we’d then like to walk to this location we would send event code 07 followed by a comma separated x & y coordinates.

First, let’s first create the game state which will keep track of the kill information:

Next, we will create communication code for processing the incoming kill information (and hand it off to the game state), and also to send a move command outgoing:

Here is the decision making which will take the current state of the game and if someone is killed it will move our player to that location:

Finally, here is our updated main file which will connect to the server and execute the main loop outlined above:

When this bot is run, it will do exactly as expected. When someone dies, the bot will strut on over to where they were killed. This isn’t too exciting, but it is definitely a good start! We are now able to send and receive game data to do a specific task in game.

The structure we created for the simple bot above can then be expanded to add much more functionality, check out the stabbybot GitHub repo to see how comm.py and state.py are fleshed out to include all the bells and whistles.

Now we’re going to be attempting to create a bot that can actually compete with average skill human players. The easiest way to be successful in stabby is to be patient, walk around, wait to see someone be killed, and then kill the player you saw kill someone else.

So here’s what we need this bot to be able to do:

Let’s take a look at brain.py and write a GenTwo class! The first easy part to implement is getting the bot to walk around randomly.

One important thing that I do above is create a locking mechanism. Because the bot is going to be doing many actions, we don’t want the bot to get confused and start killing someone halfway through a random walk. When our player starts randomly walking it will always wait 600 “steps” (events) before attempting to walk again. This was calculated as the max amount of steps from one corner of the map to the other.

Alright, now on to the meat of this puppy. We need to check for the most recent kill, and then compare this to the current perception data.

So now our task is clear, we need to find the closest coordinate from a set of coordinates. This is often called nearest neighbor search and we can accomplish it with k-d trees. I’m going to use the awesome Python library SciPy to do this by using scipy.spatial.KDTree.query.

If you’d like to see this all together here is the complete brain.py within stabbybot.

Let’s run this bot now and see how it fares:

Not bad, not bad at all. The bot stayed alive for roughly 10 minutes, which is pretty good. It scored 717 points and at the time of being killed had the second highest score in the game!

That’s all for now! If you’re looking for a fun programming project, making HTML5 game bots is a ton of fun and a great way to practice network analysis, reverse engineering, programming, algorithms, AI, and more. I look forward to seeing what you make!